Farmers are once again being encouraged to ‘Wrap It Pink’ this summer in support of the Irish Cancer Society. ‘Wrap it Pink’ is an innovative campaign launched by Dairygold Co-Op in 2015, which has raised almost €50,000 for vital cancer research and support services for those with cancer. The initiative encourages farmers to buy pink wrap instead of the typical black silage wrap with donations being made by the farmer and the Co-Op to the worthy cause. It also plays an important role in raising awareness of breast cancer and the importance of screening across the farming community and rural Ireland.

Farmers nationwide embraced the campaign with open arms and pink bales in fields are a now a familiar sight in Ireland’s landscape. Two such farmers are Michael and Raymond Kelly who wrapped 100 pink silage bales in this week’s sweltering heat on their farm in Knockgraffon, Co. Tipperary.

Commenting on the campaign Michael said: “We are delighted and proud to wrap these bales in pink for a cause that is very close to our heart.  Our mother Joan has undergone treatment for breast cancer in recent times. Having seen how difficult it was for her, we really wanted to support Dairygold’s Wrap It Pink campaign this summer in the hope of helping anyone who is affected by the illness.”

John O’ Carroll, Head of Retail at Dairygold said: “As Pink Partners of the Irish Cancer Society, we’re proud to play our part in raising awareness of breast cancer among our farmer members and the wider rural community and we’d like to once again encourage farmers nationwide who plan to cut more silage this summer to get on board with Michael and Raymond Kelly and support Wrap It Pink.”

Pink silage wrap is available from Dairygold Co-Op Superstores across Munster and nationwide at www.coopsuperstores.ie for delivery direct to farm #WrapItPink 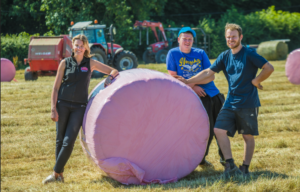