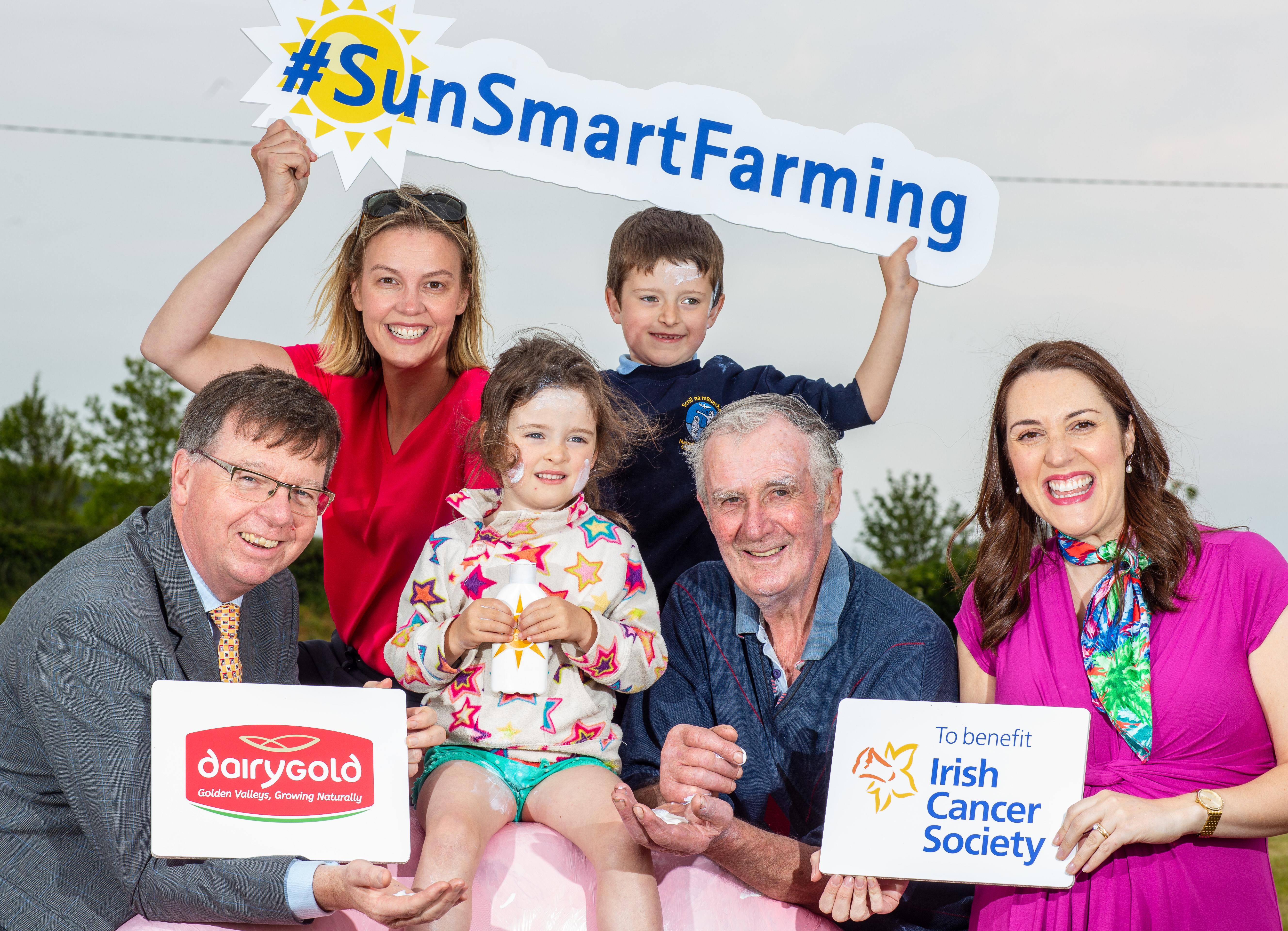 Two County Tipperary farmers and their entourage donned the shades and layered on the sun screen this week as they came together to raise awareness of the Irish Cancer Society’s SunSmart campaign. Posing on their Cashel farm against a backdrop of brightly coloured pink bales, the father and son farming duo were joined by mini members of their family to showcase the importance of being SunSmart at every age when it comes to working outdoors this summer. Dairygold, who have worked closely with the Irish Cancer Society over the past five years on their Wrap It Pink campaign, which funds the continuation of many integral breast cancer support services in Ireland, have been very vocal on their support of the SunSmart initiative, using their prominence within the farming community to encourage those working in the sun to stop, think and put their health first.

Both the Wrap It Pink and SunSmart campaigns will run in tandem throughout the coming months, with the former continuing on its mission to raise much-needed funds for breast cancer research and support services for sufferers through the sale of pink silage wrap at Co-Op Superstores across Munster and nationwide at www.coopsuperstores.ie. Similarly, the Irish Cancer Society’s SunSmart campaign aims to educate farmers and anyone working outdoors of the importance of protecting their skin from harmful UV rays while working long hours in the summer sunshine.

On hand to show their support of both initiatives was Gillian Foley and John O’Carroll from Dairygold; Claire Bowman from the Irish Cancer Society; and 3 generations of the Ryan family, Deansgrove, Cashel, whose dairy farm is watched over by the historic Rock of Cashel. While such a scenic view offers a great incentive for working long hours in the fields, it can prove to be quite a dangerous job if sun safety is not prioritised. As the most common cancer in Ireland, with more than 11,000 people diagnosed annually, skin cancer makes up a third of cancers detected in this country each year, with current numbers expected to increase more than three-fold by 2040.

Dairygold’s decision to actively show their support of the SunSmart drive by helping the Irish Cancer Society on their mission to raise awareness of such a pressing issue was a natural progression, influenced by their heavy involvement with the Wrap It Pink campaign, which launched in 2015 and has raised almost €70,000 to-date for many of the Irish Cancer Society’s free services, such as the Cancer Nurseline (1800 200 700), the Irish Cancer Society’s Night Nursing Service and 13 hospital-based Daffodil Centres. It is hoped that the farming community will embrace the SunSmart message with similar enthusiasm and take heed of the potentially life-saving advice that is on offer, with Dairygold facilitating this at every corner, providing farm safety advice in their Co-Op Superstore branches nationwide and through print and online media resources.

Speaking about the SunSmart campaign, farmer Michael Ryan was quick to praise Dairygold’s efforts in bringing the Irish Cancer Society’s message to the fore and admitted that he has now made a conscious effort not to let complacency get in the way of safeguarding his skin and his health. “It’s easy to fall into the trap of getting distracted out in the field; throwing yourself into the day’s work without even realising that temperatures are rising and the sun is out in force,” he said. “We’re all so used to running around, trying to fit as much work into the fine day as possible, when our priority should be of course, our own health. There’s often a notion that wearing extra layers or taking a minute to lash on the sun cream isn’t exactly ‘macho’, but this needs to change if we want to make sure we stay healthy.”

John O’Carroll, Head of Retail at Dairygold Co-Op Superstores also commented: “After the extremely warm summer we got last year, we felt it appropriate as a farmer-based co-operative to assist the Irish Cancer Society on their quest to combat the lack of awareness surrounding the dangers of sun exposure. Supporting the SunSmart campaign seemed the perfect way to do our bit. It’s all about educating the farming community about the SunSmart code: seek shade, cover up, wear sunglasses and sunscreen and check the UV Index to get the best protection possible. Aside from displaying educational SunSmart signage across our store network, we will also be giving out samples of La Roche Posay sun cream through our 35 stores across Munster and at Dairygold events throughout the summer.”