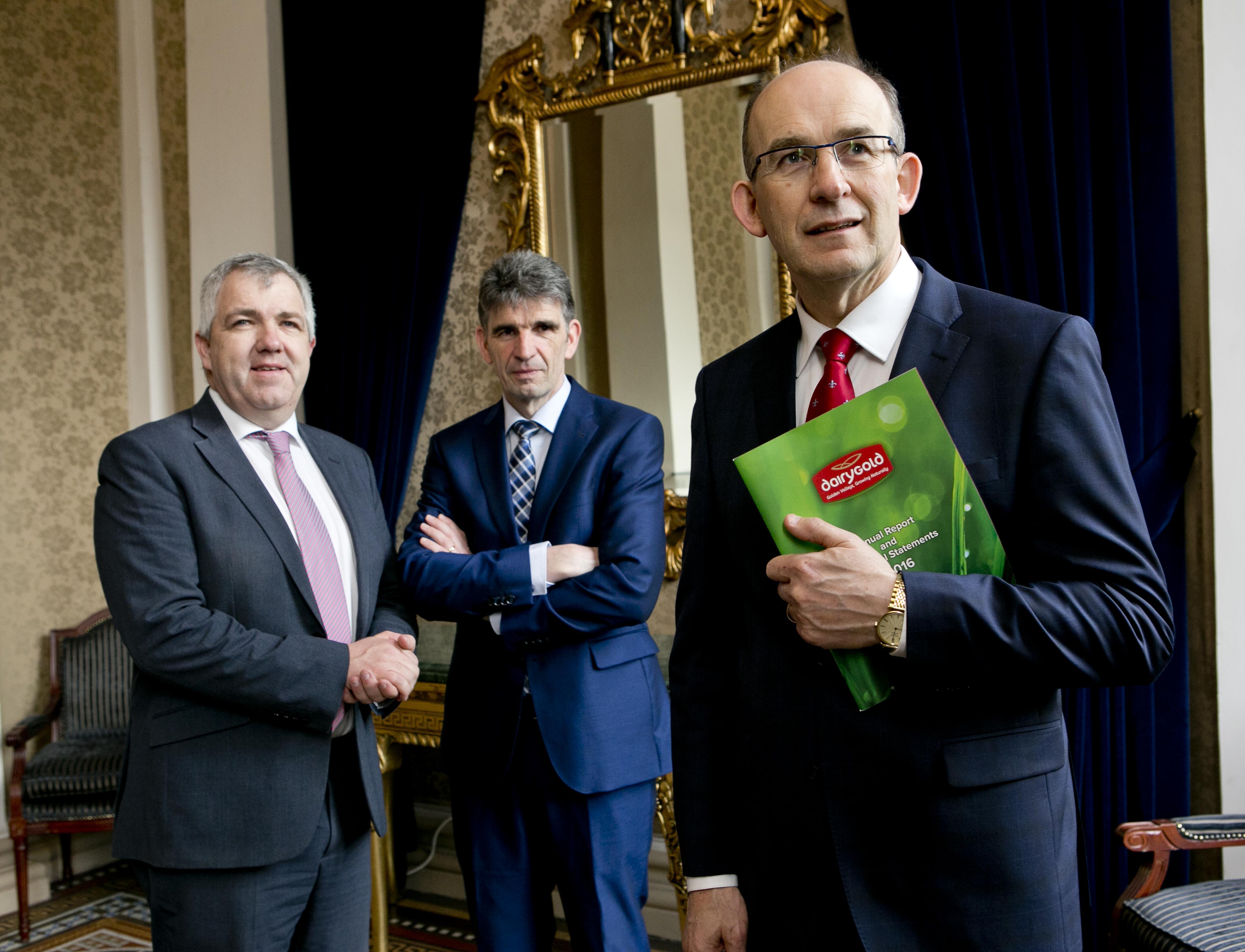 Dairygold, Ireland’s largest farmer owned dairy Co-Operative, has reported a solid financial performance for 2016, against a backdrop of very weak returns from international dairy markets, especially in the first half of the year.

Dairygold continued its ambitious capital programme during the year, investing a further €15 million in the business, bringing the total capital investment over the past six years to €200 million. This investment established a state of the art sustainable milk processing platform, across dairy sites at Mallow and Mitchelstown. The investment has increased processing capacity by 55% enabling farmer Members to fulfil their on-farm growth ambition but more importantly the business can now leverage its investments in infrastructure to progress value added commercial opportunities.

Speaking about the Mogeely investment, Dairygold Chief Executive, Jim Woulfe said: “Our commercial partnerships with global food companies have been an avenue to significant value add for the business. We will continue to seek out strategic partnerships with leading global organisations that can leverage our best in class processing facilities to deliver more value added production for the business.”

He added: “Dairygold has successfully transitioned from the quota controlled production era to the more volatile, expansionary environment. We are now following a very clear strategic path. We have built a first class processing platform and realigned our organisational structure. We have invested in the people and capability and put the appropriate financing in place, to deliver on our value added commercial objectives. We are now on the cusp of leveraging these investments to progress on our future strategy. Dairygold’s strategic growth ambitions are now specifically focused on developing value added nutritional opportunities, both through commercial partnerships and through acquisition.”

Mr. Woulfe pointed out that the year had ended with a more positive outlook for Milk Price but that some uncertainties remained. “2016 was a year of two halves as far as dairy markets were concerned”, he said. “The first half saw continued volatility with declining market returns but as we moved into the second half we began to experience a change in the market dynamic, with global milk output slowing down across all regions except for the USA, where cheap feed inputs continue to be a stimulus to drive milk production. The slowdown in milk output helped to generate market demand and global dairy prices rose slowly but steadily from a very low base.”

However, while overall import figures for the major dairy importing countries did recover and 2016 ended with a positive outlook for Milk Price, concern remains in relation to the overhang of dairy stocks, and milk powders in particular.

Dairygold responded to this improvement in market conditions with immediate milk price increases, according to Dairygold Chairman James Lynch. “From July 2016 onwards Dairygold implemented seven milk price increases in anticipation of continuing improvement in market returns. Dairygold also ensured that support was made available to our grain suppliers against the impact of the ongoing depressed international grain market following a difficult harvest. In addition, Dairygold negotiated lower cost loans and credit facilities for members with both AIB and Bank of Ireland.

The post quota milk production expansion across the Dairygold catchment area has exceeded original forecasts with the Society witnessing a 24% increase in milk volumes for 2016 at 1.2 billion litres when compared to 2014, the last full year of quota restrictions and a 44% increase on the Harvest 2020 (Government Strategic Plan) base year of 2009. Dairygold Milk Supplier Forecasts are that by 2020, Milk Supply will be approaching 1.5 billion litres per annum.

While welcoming the generally more positive global market conditions for dairying Jim Woulfe pointed to external factors which will present significant challenges in the period ahead.

“With the formal triggering of Article 50 of the Lisbon Treaty by the UK, we are now on a path towards Brexit which will have a profound impact on the Irish dairy and food industry regardless of how ‘soft’ or ‘hard’ it may be”, he said. “Together with other cheese producers in the dairy industry and with Government involvement we need collectively to address Brexit challenges for Ireland’s cheese exports of which 60% of Irish product is sold into the UK. We must continue to pursue strategies to diversify markets and to continue to add value to our dairy output, to minimise the impact of Brexit.”